Trojan:SymbOS/Locknut.A drops binaries that will crash a critical system component, preventing application from being launched in the phone and effectively locking the phone.

Trojan:SymbOS/Locknut.A is a malicous SIS file trojan that pretends to be patch for Symbian Series 60 mobile phones. It is distributed in files named patch_v1.sis and patch_v2.sis.

Locknut is targeted against Symbian Series 60 devices, but also series 70 devices, such as Nokia 7710 are vulnerable to Locknut. However when trying to install Skulls trojan on Nokia 7710, user will get a warning that the SIS file is not intended for the device, so risk of accidental infection is low.

When Locknut.A sis file is installed the files will be installed into following locations:

The Locknut.SIS will will also contain copy of itself that is copied into C:\ directory

When installed Locknut.A, drops binaries that will crash a critical system component, preventing application from being launched in the phone and effectively locking the phone. 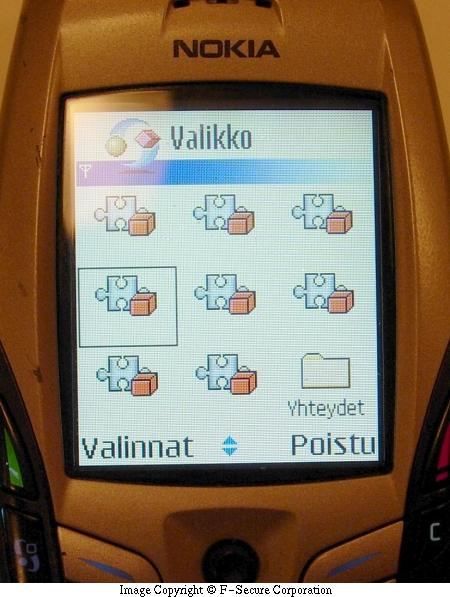 There are also claims that Locknut would disable calling functionality, so that user couldn't make calls with infected phone. But we could not reproduce this effect with any phones we have.

Both versions of Locknut.A replace a critical system binary; the patch_v2.sis file will also drop Cabir.B, which will not be able to start on the phone.

There are also versions of Locknut that include Cabir.B in same SIS file (some AV vendors name this variant Gavno.B), but since the actual trojan functionality is totally identical to Locknut.A we call both samples Locknut.A

If user starts Cabir.B manually, after disinfecting the Locknut program, Cabir.B will spread independently according to its program - i.e., it will not transfer Locknut.A into other devices.

This trojan was originally named Gavno, but since this word is also a rather vulgar term in Russian, the AV community has decided to rename it as Locknut.