Skulls.D can be disinfected by using F-Secure Mobile Security

Kill the Skulls animation process, so that you can use the phone normally:

1. Press menu button on the phone for 5 seconds to get Symbian process menu

2. Look for any suspicious process, such as Caribe or Yewsprite

3. Select suspicious process and kill it with 'C' button

4. Repeat for all other processes

Then user Mobile Anti-Virus to scan the device:

4. Uninstall the SIS file in which Skulls was installed (Flash_1[1].1_Full_DotSiS.sis)

Trojan:SymbOS/Skulls.D is a malicious SIS file trojan, that pretends to be Macromedia Flash player for Symbian Series 60 devices. 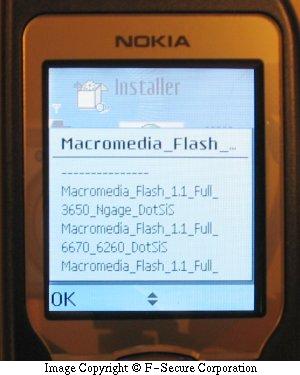 Fortunately, the Cabir.M worm in Skulls.D's payload is already detected with generic detection as Cabir.Gen; this results in Skulls.D being detected and stopped without needing an updated Anti-Virus database. Note that for this to occur, F-Secure Mobile Anti-Virus must be in realtime scan mode, as it is by default.

If you have installed Skulls.D, the most important thing is not to reboot the phone and follow the disinfection instruction in this description.

Skulls.D has been found both as independent SIS file, and as an embedded SIS in which the host SIS file pretends to contain cracked game or application.

Skulls.D also tries to disable third party applications the user would need to disinfect the phone of a Skulls infection. For some reason however, Skulls.D copies the replacement files to the device memory card, thus disabling the tools only if user has not installed them on the C: drive.

Skulls.D is designed to disable F-Secure Mobile Anti-Virus by replacing its files with non-functional versions. As the Anti-Virus detects the infected SIS file and prevents it from being installed, this does not occur. 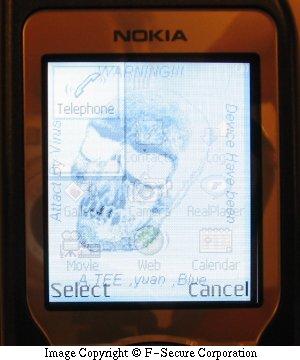