Santy is a worm was found at December 21st, 2004. It uses a vulnerability in popular phpBB discussion forum software to spread and it uses Google search engine to find vulnerable servers. It does not infect end user computers.

Google has started filtering requests made by the worm at December 22nd, 2004, in order to stop the worm.

The worm is written in Perl scripting language. When executed, the worm uses the Google search engine to look for hosts that have phpBB software in use. It does this by searching URLs that contain string "viewtopic.php". In order to get different results with different searches, the worm uses a random string in the search as well.

After the search has been performed, the worm parses the resulting page and attempts to exploit a vulnerability in phpBB software. This vulnerability, known as Highlight Vulnerability, can be used to execute arbitary code on the server running vulnerable version of phpBB. Further information about the vulnarbility is available from phpBB web site at:

If the worm is able to exploit the vulnerablity, it will attempt to transfer itself to the victim host in 20-byte chunks. If any of the chunks is lost during the transfer, it will cause the worm to get corrupted, which can render the worm disfunctional on the victim.

The worm is written to a file "m1ho2of" on the victim. After the transfer is complete, the worm will use the exploit once again to execute the code using the system default Perl interpreter.

Santy contains also a generation counter that is increased every time the worm is executed, i.e. once per infected host. If the number of generations is higher than three (3), it will execute its payload. The payload attempts to replace all files with the following extensions ".htm", ".php", ".asp", ".shtm", ".jsp" and ".phtm". The result is the these files are replaced with a HTML page that contains the following text:

...where X keeps growing from one infection to another.

The effect is that all replaced pages on the infected sites look like this: 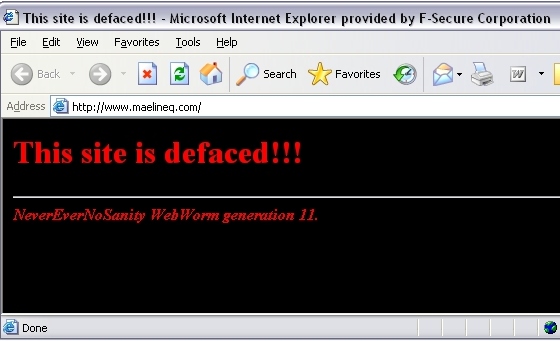