Perform a full scan of the computer system with the F-Secure security program to find and disinfect the relevant files. Before scanning, enable the product to scan system files by following these steps:

Then perform a full computer scan.

Rootkit:W32/ZAccess is distributed in programs disguised as a cracked copies of legitimate commercial software (a distribution method more commonly seen with trojans). It may be distributed via pornography websites. It has also been reported as being distributed via compromised legitimate websites.

Once installed, ZAccess will display unsolicited advertisments on the machine and redirects the web browser to unsolicited advertisement websites. In order to do the latter, the malware may contact remote servers to retrieve additional advertising information; the specific URLs contacted are varied, but the top level domain is always .CN.

On installation, the malware will replace a system driver (in the location %WINDIR%\system32\drivers) with a copy of its rootkit driver. Selection of a system driver to replace is done using an internal algorithm. The rootkit will display the contents of the original system driver, presumably to camouflage its presence on the system.

The malware then creates a hidden, encrypted volume which is used to store the original system driver file that was replaced, as well as other component files used by the malware. The hidden volume has the following format:

It also creates a zero byte Alternate Data Stream file in %WINDIR%\{numbers_only_file} which will be silently executed and run in the background: 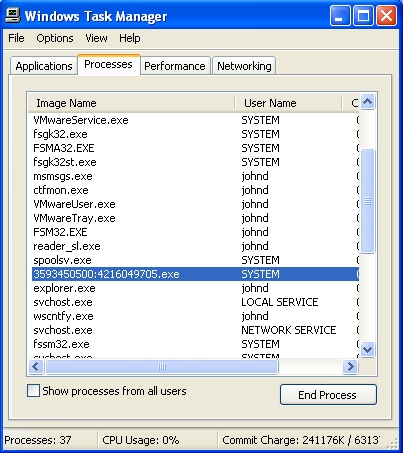 Some variants of this malware will drop other component files in the following location: