Readme is a simple mass-mailer written in Visual Basic. The worm has been found in the wild on September 3rd, 2001. It is a PE EXE file 24576 bytes long. Its code is not compressed.

When the worm's file is run it shows a messagebox with one big button labeled 'Open' and 'Urgent' as caption.

After a user clicks 'Open' button, the worm shows a fake error message:

Then the worm checks if it is already installed in a system. It looks for README.EXE file in \Windows\ folder and creates it if it's not there. The worm then modifies the Registry - it adds 'macrosoft' subkey to the current user's application autostartup key:

The 'macrosoft' subkey contains a full path for the worm's file. For example if Windows is installed with default settings, the subkey value will be 'c:\windows\readme.exe'. This way the worm starts every time when Windows is loaded.

The worm also copies itself as README.EXE to root directories of all drives that are available for writing (local and network drives where current user has write access).

Finally the worm connects to Microsoft Outlook, gets user's mail server login and password and sends itself to all email addresses found in Outlook's address book. The infected message looks like that: 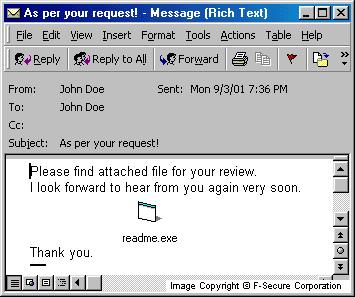 The worm's file is attached to an infected message as README.EXE file. It will infect a remote computer only when a recepient runs the attachment.

Infected messages are deleted after they are sent.

Instructions for manual removing: To remove this worm from a system it's enough to delete its file (README.EXE) from \Windows\ folder and from root directories of all drives that an infected computer has access to. If the worm's file is locked, it is advised to delete it from pure DOS or in case of Windows NT/2000 rename the file with a non-executable extension, reboot a system and then delete the previously renamed worm's file.