This is network worm with backdoor capabilities, which spreads itself under Win32 systems. The worm was reported in-the-wild in July-August, 2000. The worm itself is Win32 executable file and about 120K long, written in MS Visual C++.

When an infected file is executed, the worm registers itself in Windows registry in auto-start section:

where "filename" is the name of worm's file (usually this is "Notepad.exe", see below). As a result, the worm will be activated each time Windows starts up.

The worm then stays in the system memory as an application (visible in the task list) and runs two processes: its spreading process and backdoor process.

The spreading process spreads the worm copy through the local network to drives that are shared for reading/writing. The worm enumerates network resources and looks for "WIN" string in their names. If such a string is found from the name (i.e. Windows directory on a remote computer), the worm looks for NOTEPAD.EXE in there, renames it with a new name NOTE.COM and writes its copy with the name NOTEPAD.EXE.

The backdoor routine is quite simple. It supports just a few commands: Run (to run specified file), Upload (to create a file on affected machine) and Quit (terminate the worm routines). There are just three commands, but that is enough to install any other (more powerful) trojan/virus to the computer.

The worm also sends a notification to its "host" (worm's author?). This email message is sent to some address in China. The message contains the IP address(es) of infected machine.

Here's how the worm looks 'from the inside': 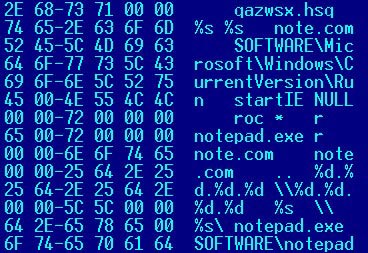 Qaz worm can be successfully disinfected with a fresh version of FSAV and the latest updates for it.

Before disinfection with FSAV, please download and run the special REG file that will remove worm's registry entry from a system Registry:

Then restart a system and perform disinfection from either DOS or Windows. Finally, rename NOTE.COM file back to NOTEPAD.EXE to have Notepad available again.

You can also use a free version of F-Prot for DOS to remove Qaz worm from an infected system. It is a requirement to perform disinfection from pure DOS and to run the above listed REG file before exiting Windows.

For successful disinfection all files detected as Qaz should be deleted from an infected system and NOTE.COM file should be renamed to NOTEPAD.EXE.

Note: to locate an infected computer within a network is possible by checking whether it sends/receives data on TCP port 7597.