The message that the worm spreads has the following content: 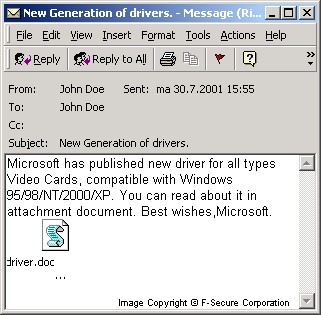 There is 46 spaces between the ".doc" and ".vbs" extensions in the attachment file name.

When executed, the worm attempts to send itself to 50 recipients taken from the first address book using Microsoft Outlook.

This worm works only in Windows NT and Windows 2000, when the system is installed onto NTFS. This is because the worm uses NTFS feature known as "streams" to hide parts of itself to "odbc.ini" in the Windows installation directory.

The worm also attempts to add a new user into system. This, however, requires that the current user has suffient priviledge, for example local administrator rights.