VBS/Monopoly is a worm, that uses Microsoft Outlook to mass mail itself. It has been created using Visual Basic Script and it works under Windows Scripting Host (WSH) version 5.0 or later.

When the script is executed, it first creates three files to Windows temporary directory: "monopoly.jpg", "monopoly.whs" and "monopoly.vbe".

After these files has been created, the worm will show a message box with the following text:

Bill Gates is guilty of monopoly. Here is the proof.

When user selects "Ok" button from the message box, the worm shows a picture of Monopoly game boad with picture of Bill Gates. 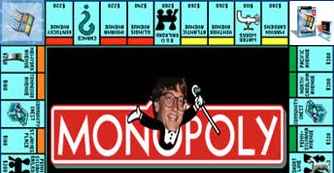 Then VBS/Monopoly attempts to mass mail itself to each recipient defined in the Outlook address lists. This message looks like the following:

This information is sent to the following addesses:

When the worm has been executed, it creates a registry key

and sets the value of it to "True", so the worm will no be executed again in the same machine.