Klez.E will destroy data on 6th of July by overwriting all files on local and network drives with random data.

The description of the original Klez variant can be found here:

Disinfection of Klez.E worm can be performed with the special tool that is available on our ftp site:

Please read the KLEZTOOL.TXT file included in the ZIP archive before using the tool.

We have produced an online video showing step-by-step how to get rid of the Klez worm.

View the video (Real) from here:

For feedback on the video or further questions, contact support@f-secure.com

Klez.E is a new variant of Klez worm that was first discovered on 17th of January 2002. The worm is "version 2.0" according to its author's classification and has several new features comparing to the older variants. The worm still has bugs that remained from previous versions.

The differences from the original version are as follows:

1. The worm installs itself to Windows System directory as WINKxxxx.EXE file. The 'xxxx' can be 2-3 random letters. The worm creates an autostarting key for its file in System Registry.

2. The worm now has file infection capabilities. When infecting an EXE file, the worm overwrites it and creates a backup file with the same name as the infected file, but with a random extension with hidden, system and read-only attributes. When the infected file is run, the worm extracts the original program from a backup file with its original name plus 'MP8' and runs it. After the program terminates, the worm deletes it. The worm doesn't infect files with the following names:

This type of infection is called 'companion infection'.

3. The worm has network spreading capabilities. The worm enumerates network resources and copies itself to remote drives twice - once as an executable file with single or double extension, and second time as a RAR archive that can have single or double extension as well. The RAR archive contains the worm's executable file with one of the following names:

The first extension of the RAR archive or of the worm's executable can be:

The second or the only extension of the worm's executable file can be:

The dropped RAR archive and worm's executable file name is either random or belongs to a file, that a worm found on a host system. So it can be for example QQ.PAS.EXE , KERNEL.MP3.PIF , DOCUMENT.SCR and so on.

Also the worm terminates processes with the following names:

5. The worm removes autostarting Registry keys of security and anti-virus software thus disabling this software or parts of it completely on next Windows startup.

7. The worm drops a new version of Elkern virus ("version 1.1" according to author's classification) that is also known as Win32.Klez.b. Please see Elkern description for more info, the link to it is on the top of this page.

8. The worm can corrupt binary executables and data files.

9. The worm contains the following text strings that are never displayed:

10. The worm has a complex payload routine. It works as a separate thread and constantly checks system date. If the month number is odd (1, 3, 5, etc.) and the date is equal to 6 then the worm proceeds further. It then checks if the month number is equal to 7 (July) or 1 (January) and sets a special flag if it is. Then the main payload routine is activated. It looks for all files on all local and network drives. If the month is not 1 or 7, the routine only affects files with the following extensions:

11. email messages sent by Klez.e are composed according to really complex rules that makes possible of creating a large number of different messages. It can create sentences from different parts like:

Just like the other variants of Klez this one uses the Incorrect MIME Header (MS01-020) vulnerabilty to send attachments that are automatically executed when the message is opened. See the link to Microsoft security advisory above.

Recipients' email addresses are collected from the Windows Address Book as well as from ICQ user databases. The worm uses it's own SMTP routines so it can send email without an email client.

Important Note: The emails sent by Klez.E worm often have faked sender's address. The worm randomly picks sender's address from web pages, ICQ databases or Windows Address Books. This means that if you get Klez.E worm in email, it's quite likely that it was NOT sent to you by the person listed in the 'From' field of email message (sender's address).

The worm can send itself in messages with one the following subjects:

Also the worm sometimes sends messages pretending to be infection removal tools from a few anti-virus companies. For example:

Also the worm can pretend to be a game, it can send itself (usually as SETUP.EXE or INSTALL.EXE) with the a message:

Sometimes the virus compares current date against a preset list of 10 different holiday dates. If the date matches, the worm will send an email with a subject field such as "Happy Christmas", "Have a nice Christmas" or "Have a good Christmas". There are several variations on the exact subject field.

This only happens on one day per year for each of the holidays - for Christmas, Klez only tries to send these messages on 25th of December. Explanation for getting these messages before Christmas is simply that lots of people have their computers date set wrong.

Here are the screenshots of Klez.E worm as it arrives in email: 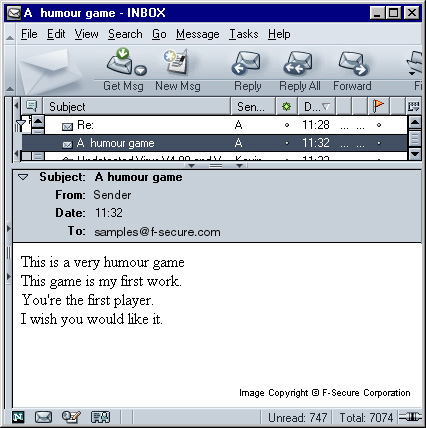 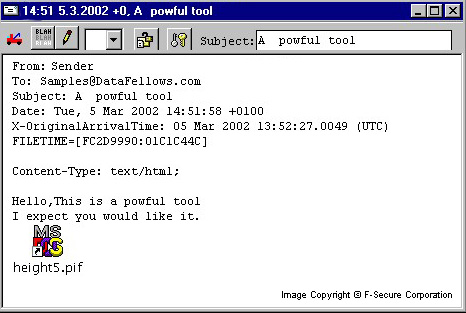 12. The worm corrupts a lot of system files including DLL and VXD ones that often makes a system unusable after restart. The corruption happens because the worm tries to preserve the time/date stamp of a file it tries to infect and it saves this value into EXE file header without bothering to check if it's a PE, NE or LE header. So NE and LE headers get corrupted and a file usually becomes unusable after that.