VBS/Fireburn.A is a VB script worm, spreading through Outlook and mIRC.

When the VB script is run, it saves a copy of itself in [windows directory]\rundll32.vbs and alters the registry so that this program is run on the startup.

The registry keys which it adds/modifies are:

A filename is chosen randomly from a list of x-rated filenames.

Then the script looks for the mIRC Internet Relay Chat client in either c:\MIRC or [program files folder]\mirc. If mIRC is found, the script overwrites the script.ini file with a new one which does the following:

- when a connection is made to an IRC server, the rundll32.vbs file that was copied to the windows directory is moved into the windows system directory and renamed to the random filename chosen earlier;

- when the connection to the IRC server is broken, the file is copied back into the windows directory with a name rundll32.vbs;

- when anyone joins a channel, the file from the windows system directory is sent to them;

- if anyone writes the word "sex" to a channel, the file is sent to them from the windows system directory;

- additional automatic text responses are made to separate other phrases.

Then the script creates one email which is emailed (as a BCC) to each contact in the user's Outlook address book. The email will contain the worm, which is attached with the filename previously chosen.

The subject line of the email is either:

The body of the email contains the text: 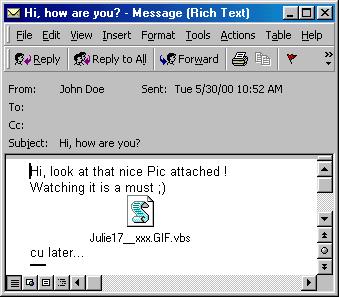 The email is deleted from sent items so that the victim is unaware of the email that was sent.

The email payload is run each time when the worm is executed.

Then the worm checks if the date is the 20th June and if it is, the worm displays a messagebox with the text:

When the messagebox is closed, the registry is updated to disable both the keyboard and the mouse on the next reboot:

F-Secure has received a handful of reports of this virus being in the wild during last days of May, 2000. However, the virus is not expected to go far.