Email-Worm:W32/Bagle.B was first found on 17th of February 2004. Once installed, Bagle.B installs a backdoor on the infected machine and attempts to communicate details of the host to a remote site.

Bagle.B propagates using messages with the subject 'ID [random string]... thanks' and random EXE attachment names. The worm's executable file, which was attached to the messages, used an icon representing an audio file.

Fortunately, Bagle.B was programmed to stop spreading on 25th of February 2004.

On execution, the worm launchs the Windows "Sound Recorder", executing the Windows application "sndrec32.exe", as a decoy. 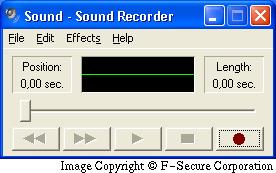 The worm copies itself to:

and modifies the registry to point to it:

Where %sysdir% is the Windows System folder.

The following keys will also be used by the worm:

The worm will access four different URLs contained within its body. They are located on three different web sites:

The target of the URLs are PHP files, to which the worm will post information about the infected host, namely the port where the backdoor is listening and a randomly generated ID. Some of those hosts are already unavailable.

The worm will attempt to contact all of those URLs every 166 minutes, checking in every iteration whether its internal deadline has been reached.

This variant also contains a backdoor that will listen on port 8866. It provides access to the computer where the worm is running, where it allows to download and run any executable sent to the backdoor with a given format.

The worm will send emails with the following characteristics: 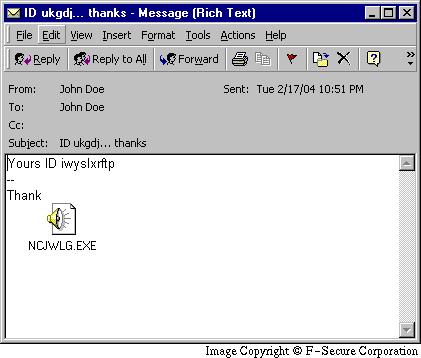 To find new victims, the worm harvests addresses from files with the extensions:

It will avoid sending mail to addresses containing any of the following text strings: