Bropia.F is a minor variant of Bropia.A. Like the previous variants, it uses MSN messenger for spreading. It also drops a variant of Rbot on the infected system.

When run, the worm copies itself as "msnus.exe" in the Windows system directory. Then it checks files:

If these files are not found, it drops file "cz.exe" and executes it. This file is a variant of Rbot. When "cz.exe" is run, it copies itself as "winhost.exe" in the Windows system directory and adds the following registry keys:

This ensures that it will be executed at next system startup. The bot can be used as a backdoor, collecting system information, logging keystrokes, relaying spam and for various other purposes.Brobia.F also drops a file "sexy.jpg" and opens it. On default installation of Windows, the program associated with jpg-extension is usually Internet Explorer. When opened with Internet Explorer, the picture looks like this: 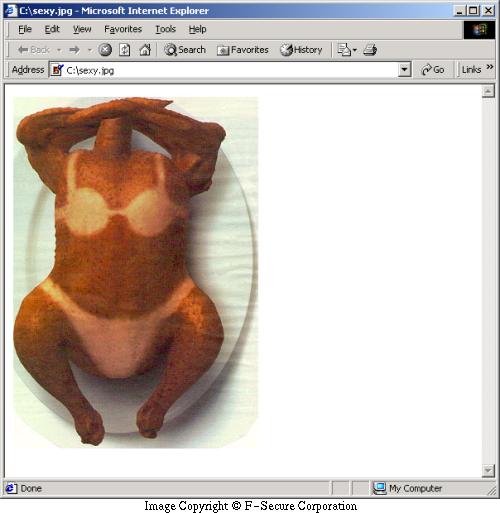 The worm copies itself in C-directory using one of the following filenames:

Then it attempts to send this file using MSN messenger to all active MSN contacts. The recipient has to accept and open the file to get infected by the worm.