Back Orifice 2000 is a new version of the famous Back Orifice backdoor trojan (hacker's remote access tool). It was created by the Cult of Dead Cow hackers group in July 1999. Originally the BO2K was released as a source code and utilities package on a CD-ROM. There are reports that some files on that CD-ROM were infected with CIH virus, so the people who got that CD might get infected and spread not only the compiled backdoor, but also the CIH virus.

The first binary version of BO2K was compiled and spread in the US. A few days later there appeared an international version of this backdoor. With the time there may appear lots of versions of BO2K with different compilers and having different features.

As its previous versions, the Back Orifice 2000 backdoor has 2 major parts: client and server. The server part needs to be installed on a computer system to gain access to it with the client part. The client part connects to the server part via network and is used to perform a wide variety of actions to remote system. The client part has a dialog interface that eases the process of hacking of the remote computer.

Here's the screenshot of the client part. 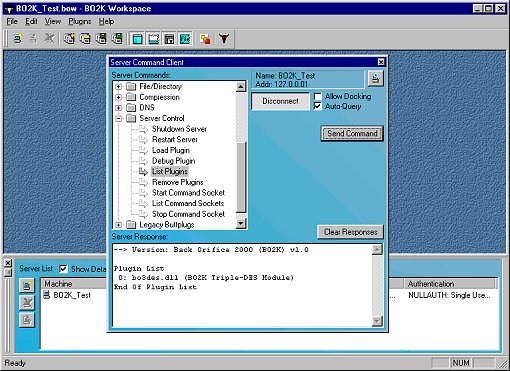 Here's the screenshot of the BO2K configuration wizard.

When the server part is configured to act like a trojan i.e. to install itself hideously to someone's system it writes itself to \Windows\System\ or \WinNT\System32\ folders under a name specified during configuration (default is UMGR32.EXE). Then it modifies the Registry. Under Windows 95/98 server execution string is written to:

under Windows NT the execution string is written to:

Then the file from which the server part started can be deleted (if it was specified during configuring). After that the BO2K will be active in memory each time Windows starts and will provide access to the infected system for hackers who have the client part and the correct password.

Being active the server part can hide its process or prevent its task to be killed from Task Manager (on NT). The backdoor uses a smart trick on NT by constantly changing its PID (process ID) and by creating the additional process of itself that will keep the backdoor alive even if one of the processes is killed. Besides, the server part adds a random (but large) number of spaces and 'e' at the end of its name, so the server part file can't be deleted from Windows (invalid or long name error occurs) though disk checking utilities don't find any problems with filename. The server part file can be only deleted from DOS or DOS session (if the file is not locked of course).

Back Orifice 2000 like its ancestors has a lot of features. But unlike the older versions the BO2K has many improvements: connection encryption (including strong 3DES), ability to work under NT, to use UDP, to allow internal plugins in DLL format, a more advanced security, more remote system control features.

The US version has some serious bugs - sometimes installation of the backdoor fails under NT. On NT shutdown an error messagebox is displayed for some time.