A type of worm that spreads on vulnerable Bluetooth networks.

F-Secure Mobile Security for Symbian Series 60 will detect Cabir and will delete the worm components. After deleting the worm's files you can delete this directory: 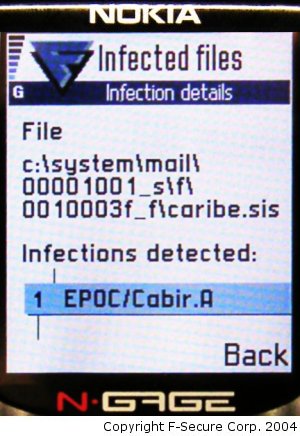 Our F-Cabir Utility program can be used to disinfect the phone. The program is available for direct download to the phone:

1. Open web browser on the phone2. Go to http://mobile.f-secure.com/disinfection/index.html3. Select link "F-Cabir"4. Download the file and select open after download5. Install the F-Cabir tool6. Go to applications menu and start F-Cabir7. Select scan and answer yes when tool asks do you want to disinfect

Alternatively, you can disinfect the system manually by installing a file manager application and manually deleting these files:

Bluetooth-Worm:SymbOS/Cabir identifies a large family of Bluetooth-worms that runs on Symbian mobile phones that support the Series 60 platform.

Please note that the Cabir worm can only reach mobile phones that support Bluetooth, and are in discoverable mode. 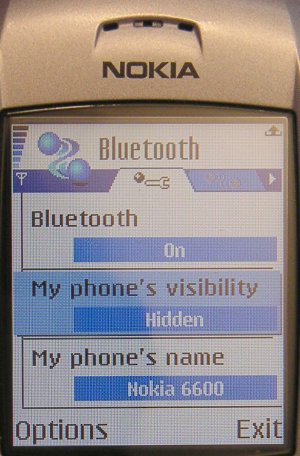 Setting your phone into non-discoverable (hidden) Bluetooth mode will protect your phone from the Cabir worm. Once the phone is infected however it will try to infect other systems even if user tries to disable Bluetooth from system settings.

The details below describe the Cabir.A variant.

The caribe.sis file will not arrive automatically to the target device, so the user needs to answer yes to the transfer question while the infected device is still in range. The question will be repeated to the user if they select no.

The user must click the SIS file in order to install it. The SIS file contains autostart settings that will automatically execute caribe.app after the SIS file is installed. The worm then activates and starts looking for new devices to infect via Bluetooth.

Cabir is capable of sending infected files to only one other device per activation. It will try to infect one other device when it is activated the first time, and then one more each time when the phone is rebooted.

In our tests we also found that the newly infected phone will first look for the phone that sent it the infected file. This means Cabir is capable of spreading widely only in cases where the phone that sent the infected file is out of range before the user activates Cabir on the new phone. This means that while Cabir is capable of spreading in the wild, it would spread quite slowly and would not cause a large epidemic.

One curious fact is that in Series 60 phones the bluetooth functionality is independent from the GSM side, and if the phone is rebooted Cabir will try to spread even if the user doesn't enter his PIN code.

When the user clicks on the caribe.sis file in phone's messaging Inbox the phone will display a warning dialog: 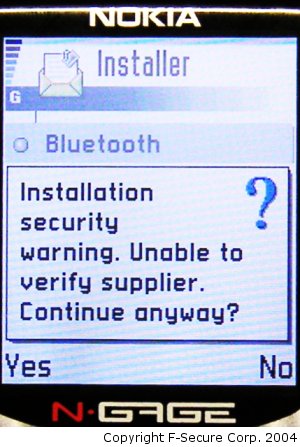 If the user selects "Yes" the phone will ask the normal installation question: 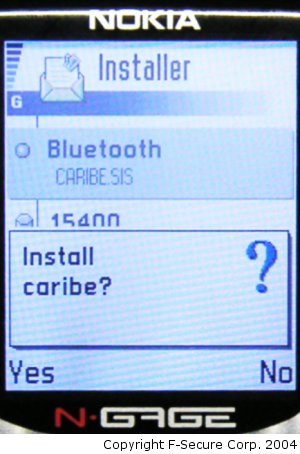 If the user selects "Yes" the Cabir worm will activate and show a dialog that contains the name that malware author wants to give to the worm and the author's initials and the group initial of 29A (it seems that in some phone models, for example Nokia 6600, this dialog is not shown). 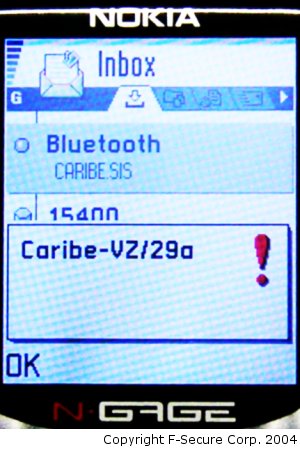 When the caribe.sis file is installed the installer will copy the worm's executables into following locations:

When the caribe.app is executed it copies the following files:

This is most likely done in case the user installs the application to the memory card.

Then the worm will recreate the caribe.sis file from worm component files and data blocks that are in caribe.app.

After recreating the caribe.sis file, the worm starts to look for all visible Bluetooth devices and send the SIS file to them.