Worm:VBS/Onthefly (also known as VBS/VBSWG) is an encrypted Visual Basic Script worm which spreads itself through mass-mailing via the Microsoft Outlook application.

On February 12th, 2001 this worm has spread rapidly in all over the world in just a few hours.

The author of the virus ("OnTheFly") has been found. His real-world identity has been found as well and passed on the the officials for further investigation.

The outbreak caused by this virus seems to be quiet now. It seems that the virus caused biggest infection in North America on the 12th of February. This seemed to caused largely because of timezone issues; at this time it was late evening or night time in Europe and Asia. When people in Europe woke up on the 13th, most antivirus programs already handled the virus and the media was warning users from not touching Kournikova-themed attachments.

F-Secure estimates that Onthefly-virus infected several hundreds of thousands of computers worldwide, putting this virus into the same category with Melissa virus in 1999 - which was the largest virus case of its time. However, Onthefly was significantly smaller than LoveLetter. Additionally, Onthefly did not do any direct damage.

This worm arrives as an attachment in Outlook message with the following content: 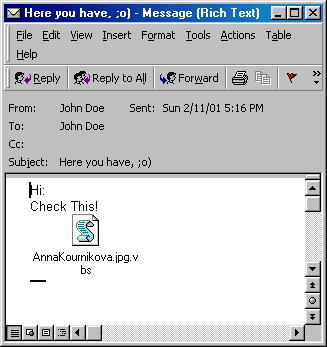 Once a user click on the attached file, the worm will execute. First of all, it adds the following key to the registry:

The worm then copies itself to Windows directory using a constant file name "AnnaKournikova.jpg.vbs" and sends itself to allrecipients on all address books. It also adds a marker to the registry, so it will not mass mail again.At January 26th, the worm will open the web browser and connects to an innocent Netherlander web site.