VBSWG.X, also known as Homepage, is an encrypted email worm found in the wild on May 9th, 2001

This is an encrypted worm generated with VBSWG virus kit. It is similar to the widely spread worm at February 2001 - VBS/Onthefly (also known as Anna Kournikova worm). 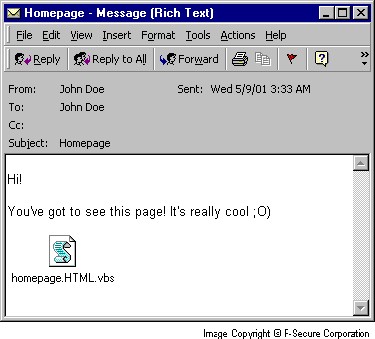 When the attached file is executed, the worm will send (mass mail) itself to each recipient in every address book. Then the worm tries to hide the mass mailing. It deletes all messages from Inbox and Deleted Items folders which contain a subject 'Homepage'. To mark that the mass mailing has been done, VBSWG.X adds a registry key:

After that, depending on a random number, the worm attempts to open one of four x-rated web pages. However, the mass-mailing part of the code generates much more serious consequences, including overloading email servers and public relation problems.

F-Secure Anti-Virus detects this variant with the updates published at May 9th, 2001.