At the time of writing of this description, F-Secure has received no reports about this worm from the field.Spester consists of tree parts: a binary dropper, a Visual Basic Script worm and an IRC worm.

The binary dropper of the worm usually arrives in a ZIP archive attached to an email message. The archive name is SPDTEST.ZIP and it contains SPDTEST.EXE file, the dropper itself. When a user extracts and runs the EXE file, a system becomes infected.The binary component of Spester worm is an EXE file 19968 bytes long. When packed into a ZIP archive for spreading it is less than 9350 bytes long. The worm's executable file is disguised as a joke program. When it's run it shows a dialog box with a single button and asks a user to click it. When a user moves a cursor close to a button, it moves away and the text on it changes. Text strings on the button can be the following:

After this the binary part of the worm displays a big button with the following text: 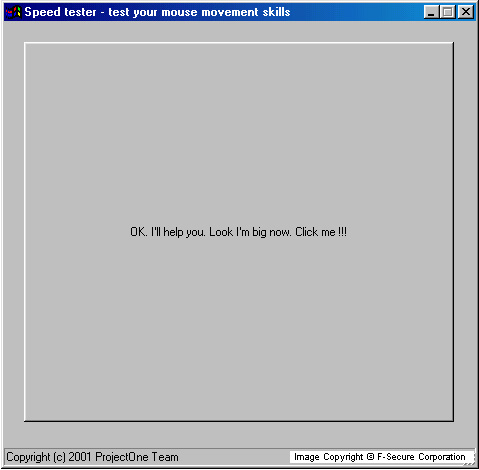 When a user clicks on a big button, the worm shows a messagebox:

And then it starts to simulate hard disk formatting. But after some time the worm shows another messagebox:

While a user is busy with a joke part of the worm, it drops several files to a user's system. The worm drops SCRIPT.INI and a packed copy of itself as SPDTEST.ZIP into C:\Mirc\ folder. The SCRIPT.INI file contains commands that will send the worm's ZIP archive to all users joining an IRC channel that an infected user occupies.The worm also drops a packed copy of itself as SPDTEST.ZIP and a VBS script named ONECLOCK.VBS into c:\Program Files\Internet Explorer\ folders. The worm then creates a special key in the Registry that will run the VBS file on next Windows startup.Visual basic Script worm When executed the script first checks for a file ONE.DAT in "c:\Program Files\Common Files\" folder and if it does not exist it runs its spreading routine. Then it creates an empty file with this name (to use it later as an infection marker) and runs its payload.The spreading routine uses Outlook application and sends messages to all address listed in Outlook address book. These messages look as follows: 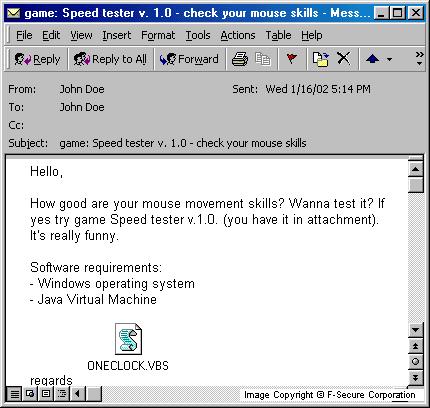 As an attachment the script uses SPDTEST.ZIP file from "C:\Program Files\Internet Explorer" folder if it is present. If not the script attaches itself only.The payload in the script part of the worm activates on 25th, 10th, 31st, 9th and 12th of each month.When the day is 25th it runs the spreading routine. On 10th of each month it shows the following message box:

On 9th and 12th the virus shows another message box:

When the day is 31st it runs another routine which creates in the root of C: drive 3 types of directories: 51 directories with the following names:

91 directories with the following names:

and 131 directories with the following names: