Skulls.L is a variant of SymbOS/Skulls.C trojan. The component files of the trojan are almost identical to Skulls.C. The main difference between Skulls.L and Skulls.C is that Skulls.L pretends to be a pirate copied version of F-Secure Mobile Anti-Virus.

The real F-Secure Mobile Anti-Virus should be downloaded only from official F-Secure servers, and the correct installation SIS package is Symbian signed, so you can verify the source.

So if you are trying to install something that shows following warning, abort the installation. 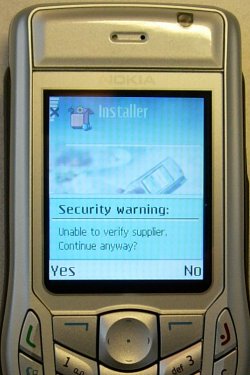 Skulls.L is a malicious SIS file trojan that replaces the system applications with non-functional versions, drops SymbOS/Cabir.F and Cabir.G worms in to the phone and disables third party applications that could be used to disinfect with such as FExplorer, EFileman. 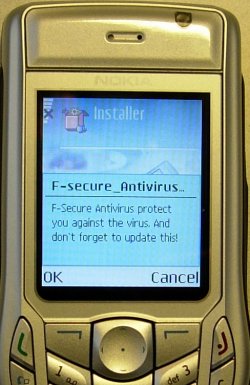 Like Skulls.A the Skulls.L replaces the application icons with skull icon, this time so that each replaced application has caption "Skulls"

If Skulls.L is installed only the calling from the phone and answering calls works. All functions which need some system application, such as SMS and MMS messaging, web browsing and camera no longer function.

If you have installed Skulls.L, the most important thing is not to reboot the phone and follow the disinfection instruction in this description.

Like Skulls.A Skulls.L is a SIS file that installs critical System ROM binaries and Cabir.F and Cabir.G worms into C: drive. The System ROM files are installed with exact same names and locations as in the ROM drive.

Replaces built in applications with non-functional ones and installs Cabir.F and Cabir.G worms. 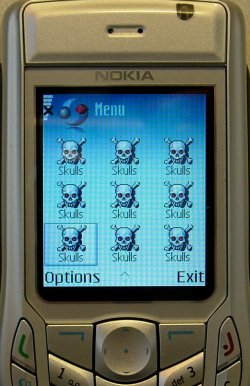