Prune is a Visual Basic Script worm which spreads via email, mIRC and network shares.

Once executed the Prune worm copies itself as "UN_Interview.txt.vbs" in C:\Windows folder. Then it runs three routines that will spread it via email, mIRC and network followed by a payload.

The worm uses MS Outlook application to spread to all contacts listed in each address book. The infected email message looks as follows:

After the mass mailing is done the worm deletes the sent messages.

Prune attempts to spread via mIRC by checking for the presence of mirc.ini file in C:\mirc folder and if such is found it tries to send "UN_Interview.txt.vbs" when the user joins a channel.

Prune worm scans a range of specific IP addresses and searches for shared "C" drives. For each such found drive the worm maps it as T: drive and tries to copies itself as "UN_Interview.txt.vbs" in Windows Startup folder. During this routine the worm creates a file HCKD.txt in which it saves the result of the IP scanning. The specific IP address used by Prune worm belongs to Washington University.

The worm carries within itself the code of a picture, which it drops in TEMP folder as Peach.jpg and opens it. 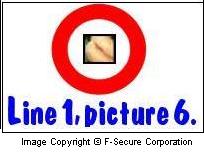 The picture seems to give an answer to the question asked in the 'peach' game in the first PDF script worm Peachy. For more information on Peachy worm see:

When the system date is 1st of the month, Prune worm copies itself additionally in 39 files on C:\UNZIPPED and C:\WINDOWS\DESKTOP directories using several file names such as:

Then it shows a message box with the following text:

When the date is 1st, 2nd, 3rd, 4th or 5th of the month Prune worm tries to erase the files from Windows installation folded, Windows System folder or from the C: drive.

When the system date is 5th of the month Prune shows another message box: