F-Secure received several reports of W32/Myparty worm from the field at January 28th, 2002. First samples arrived from Singapore and then more various other Asian countries, but soon samples were coming in from all around Europe and USA too.

If you have Windows 9x-based system, restart your computer first. Then scan all your hard drives and delete all found samples of Myparty worm. Use 'Ask after scan' as the default action for F-Secure Anti-Virus and then select 'Delete' action for worm files. Important: do not select 'Delete' disinfection action if an infection is reported in email database!

If you have NT-based system, open Task Manager, Click on 'Processes' tab, find 'msstask.exe' process, select it by clicking on its name and then click 'End Process' button. Important: do not terminate 'mstask.exe' process! After that locate MSSTASK.EXE file on your hard drive (it should be in your user profile \Start Menu\Programs\Startup folder) and delete it. You can use 'Find Files and Folders' functionality of Windows to search for 'MSSTASK.EXE' file.

This worm spreads in a message with the following content:

Please note that the attachment may look like a link to a web site in some email clients.

The worm is a PE EXE file about 30kb long, compressed with a modified UPX file compressor. The origin of the worm is most likely Russia. The worm behaves a bit differently on NT and 9x-based systems. On non-Russian NT-based systems the worm drops a backdoor that is controlled by a script on a remote website.

When the worm's file is activated, it first checks system date. If the year is 2002, months is January and date is earlier than 25th, the worm tries to copy itself to \Recycled or \Recycler folder and terminates its process. If the date is between 25th and 29th, the worm does not perform this operation and continues working.

The worm then checks keyboard layouts and if one of the layouts is equal to 0419 (Russian), the worm copies itself to Recycled Bin and terminates its process. Systems with Russian keyboard layouts are therefore not affected.

On non-Russian NT-based systems,the worm drops a backdoor to the current user's profile startup folder (\Start Menu\Programs\Startup) as MSSTASK.EXE. This file will be activated on next Windows startup and also after the worm sends itself out. The dropped file is a backdoor that is controlled by a CGI script a website with address '209.151.250.170'.

If the worm is started from a *.COM file, it only copies its file as REGCTRL.EXE to either \Recycled or root folder of C:\ drive, activates this file and moves the original file that it was started from to Recycled Bin. This does not happen on Windows 9x systems.

After that, the worm opens a default web browser on 'www.disney.com' page and starts the REGCTRL.EXE file from the location it was copied to earlier.

After mass-mailing the worm moves its file to Recycled Bin and activates a backdoor (if it was previously dropped to Startup folder of current user's profile).

Here's what the message and attachment looks like under Outlook Express: 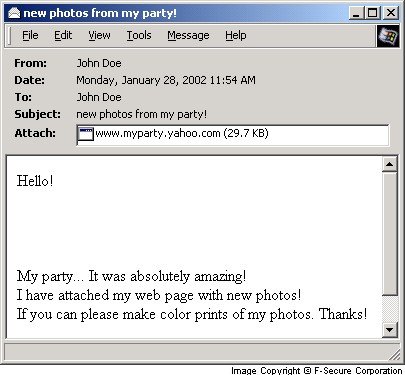 Here's what the message and attachment looks like under Outlook 2000: 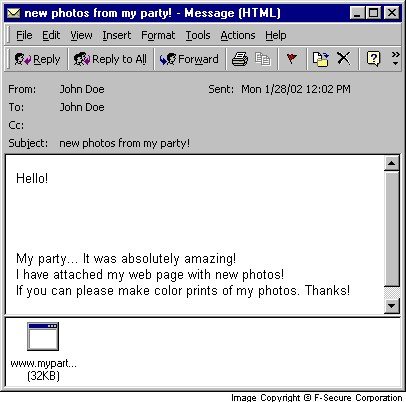 Here's what the message and attachment looks like under Outlook XP: 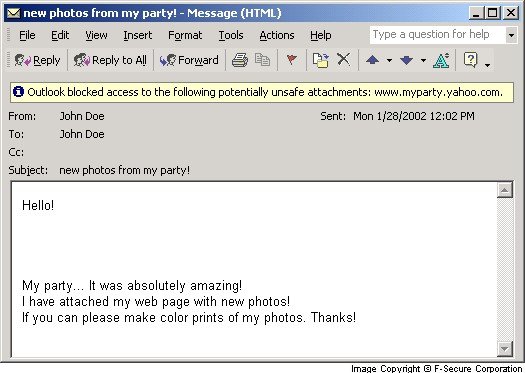 Here's what the message and attachment looks like under Netscape 4.61:

Here's what the message and attachment looks like under Netscape 6.21: 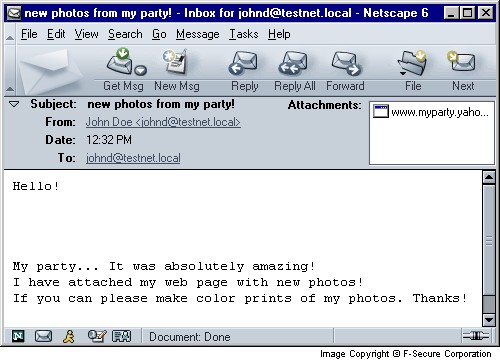 Here's what the message and attachment looks like under Eudora 5: