Mylife is a simple mass-mailer written in Visual Basic and packed with UPX file compressor.

This version was first discovered on 7th of March 2002.

This worm usually arrives as an email attachment named 'My Life.scr'. When a user clicks on the attachment the worm is activated. It shows a picture, installs itself to system (into Windows System folder) as My Life.scr and adds its startup key to the Registry. Here's the picture that the worm shows:

The worm sends itself to all recepients of an infected user's Outlook Address Book with the following message:

The worm has a payload - it can delete files with the following extensions:

The payload has a trigger - it checks if some variable is equal or bigger that 45 and activates if it is.

This worm variant was found on 22nd of March 2002. It quickly spread to many areas in Asia and Australia.

The worm is a PE executable file written in Visual Basic and compressed with UPX file compressor.

The worm spreads via Outlook, sending itself to every address found from the address book. The worm also gets email addresses from user's MSN Messenger database.

Do note the poor attempt to make the email look like it has been scanned by a gateway virus scanner on announced clean.

After user clicks on the attachment CARI.SCR, he will see this image on-screen: 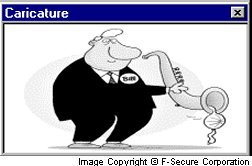 After first activation the worm copies itself to Windows System directory as CARI.SCR and adds a startup key for its file to the Registry:

Where %SysDir% is Windows System folder.

The worm has a payload. After spreading the worm can delete files with the following extensions:

The worm also can delete all files from the following locations:

The payload is time-triggered and only works if hour value is equal to 8 and if the worm's file CARI.SCR is already present in Windows System directory.

Mylife.F worm was found in the wild on April 2nd, 2002. Largest infections currently in Australia and UK.

This variant is spreading in messages which look like this:

NOTE:Mylife.M variant is not currently widespread enough to be ranked as an alert under F-Secure Radar alerting system.

This variant of the worm appeared in the beginning of July 2003. The worm's file is a PE EXE file 8192 byte long compressed with UPX file compressor.

When the worm's file is run, it creates an empty file with the name 'MyLife.mpg' in the root of C: drive and tries to open it with Windows Media Player. Then the worm it copies itself to Windows System folder with the following names:

Then it creates a startup key for one of its files in System Registry:

The worm spreads itself in 2 different email messages: