Caution: Manual disinfection is a risky process; it is recommended only for advanced users.

Manual disinfection of Mydoom consists of the following steps:

Email-Worm:W32/Mydoom.B is an email worm that is capable of launching attacks against two websites, www.sco.comand www.microsoft.com. The worm also prevents infected machines from accessing anti-virus sites, including www.f-secure.com.

Mydoom.B is a variant of the Mydoom worm. It uses the same scrambling technique as the previous variant, ROT13, and shares most of its features. The worm contains this message, which is never displayed:

The following picture briefly shows the structure of the Mydoom.B worm, which can be appreciated in full detail in the PDF graph available here. 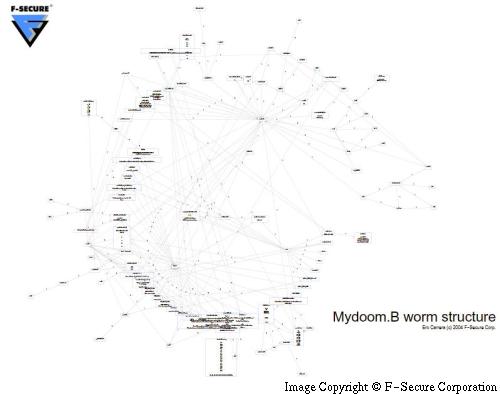 It will copy itself to the following location:

And will add the following registry entries:

It drops its backdoor component, encoded in its body and packed with UPX as:

This is loaded under Explorer from this registry key:

The worm will create a mutex with the name "sync-v1.01__ipcmtx0" to ensure only one instance of itself is running at the same time.

Once run it will look for the previous variant, Mydoom.A, and will terminate its process and delete "shimgapi.dll".

The worm has the ability of sending itself to already infected computers. It will do so by first finding them through a network scan, where IP addresses will be randomly forged (skipping some invalid ranges). Then a connection attempt is made to port 3127 (opened by previous variant's backdoor), if the machine is found infected then the worm transfers itself and will be executed immediately, thereby updating the infected computers to the new version without the need for the user to receive the worm through email.

The other DDoS attack launches 14 threads against www.microsoft.com every 1024 milliseconds.

The hosts file in the infected machines will be modified so that domains belonging to Anti-Virus companies and other commercial sites are resolved to the IP address 0.0.0.0, rendering them inaccessible. The file is encrypted within the worms code and contain the following:

An additional line is added before the the date when attack against Microsoft begins:

Which will make the site inaccessible. The 3rd of February the entry will be removed so the attack can be performed, which will probably cause some difficulties reaching it, if the DDoS is successful.

The modifications in the hosts file are probably targeted so that customers of the most widespread Anti-Virus products can't download new updates to disinfect the worm.

And extensions chosen from:

The email messages sent by the worm have the following characteristics: Subjects can be any of the following:

The body text can be one of the following:

with the following extensions:

As with older Mydoom variants, Mydoom.B collects addresses from Windows' Address Book and from files with extension:

It will try to avoid anti-spam tricks used by people to obfuscate emails addresses in webpages.

Once an address is chosen from the list of harvested addresses, the worm will send an email to addresses in the same domain but to accounts like:

It will avoid sending itself to email addresses containing the following account names: