Trojan.Mquito is cracked version of game that runs on Symbian Series 60 devices. The game contains functionality that will send SMS message to certain number each time when the game is started.

Disinfection with Anti-Virus for Symbian OS

F-Secure Anti-Virus for Symbian Series 60 detects the game binary and prevents it from executing. You can delete the game file by instructing Anti-Virus to delete detected files.

The Trojan.Mquito is not a trojanized version of the game, the hidden SMS functionality was put in the game from the beginning by the original manufacturer.

This functionality was supposed to be some kind of a copy-protecting technique, but it didn't work right and the whole functionality backfired.

According to the manufacturer, the premium rate contract for the receiving phone numbers has been terminated, so although old versions of the game still send hidden SMS messages, it only costs the nominal fee of sending the message itself.

Current versions of this game no longer have this hidden functionality, but "cracked" versions of Mosquitos still float in P2P network - and they still send these messages.

The SMS sending version of the game can still be identified by the message it shows when the game starts. 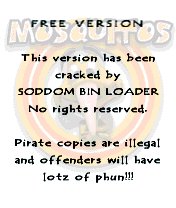 The original version will display following text, which varies a bit depending on the region.

Needless to say that the 'trojan' version of the game can be found only from pirated sources. So installing such program is not recommended in the first place, as any copy that contains the SMS routine is an illegal copy.

The game is downloaded in Symbian installation SIS package, from where user has to install the the game manually.

The Mquito is distributed as cracked version of game Mosquitos in pirate channels, such as P2P file share networks.

When the Mquito is run it will show the dialog containing message from cracker and send SMS message to premium rate number. After sending the message the game will start normally.

The SMS sending routine is built into the binary by game developers, not inserted by crackers

The message is sent only when the game starts, and the sending routine will not be called before the Mquito is started second time.