This email worm is spreading using MS Outlook. The worm itself is Win32 executable file about 130K of length written in Visual Basic language.

When the worm file is run (double click on attached EXE file) it displays the following picture: 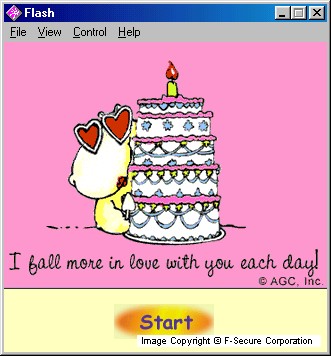 and then three other pictures that are not Miss World pictures as it is written in the worm. After that the worm runs its spreading and two trojan routines.

To spread the worm uses a standard way. It connects to MS Outlook, gets up to 50 addresses from address book and sends messages to there. The messages have:

The attached file has the name of original EXE file that was activated. The "original" EXE file name in which the worm was received is MSWORLD.EXE.

Next the worm appends to the end of C:\AUTOEXEC.BAT file DOS batch commands that display the message:

and then format all local fixed drives.

The worm then tries to delete the system registry files and their backups:

Because .DAT these files are usually locked by system, the worm fails to delete them. Then the worm exits.