At the time of writing, F-Secure has received no report about this worm from the field.

Gigger is a destructive worm that spreads itself as a fast mass-mailer by using Outlook and as a slow mass-mailer (in infected HTML messages) using Outlook Express. It is written in both JavaScript and Visual Basic Script.

When executed, the worm first creates two files into the root of the C: drive: "b.htm" and "bla.hta".

Next Gigger checks an infection marker from the registry, and if it is not present, it is created. The registry key is:

The worm goes all mapped network drives from "C" to "M". If possible, it creates a copy of itself into file

for each drive. It also copies itself to

The worm executes its slow mass-mailing routine. It changes Outlook Express settings so that every message sent from an infected machine is in HTML format and contains a copy of the worm, by embedding the file "mmsn_offline.htm" into the message. On that way the worm will activate when next recipient open or view such infected message.

The fast mass mailing part of the worm collects email addresses from both Outlook contacts folder and from the Windows Address Book. The worm sends itself to each address collected with the following characteristics: 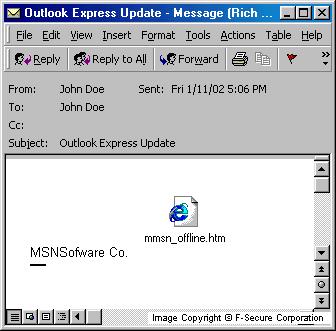 The worm also sends a message to g_dv20@mail.bg, which propably belongs to the virus writer. The message contains a list of all email addresses where the worm was sent.

If the worm fails in the above section to access Outlook, or it fails to create files that it needs, it adds a line to the "c:\autoexec.bat" that attempts to format the C: drive. However, this payload is able to activate only in Windows 9x, and it may not work in localized versions.

Gigger also drops "Windows\Help\Charts.vbs", which contains another fast mass-mailer, and runs it. It also adds it to the registry, so it will be executed in the each system startup by using the following registry key:

The worm again collects email addresses from Outlook Contacts folder, and sends the following message to each recipient:

The attachment name is set to "Reports", which is the reason why some email clients may show the attachment as "Reports" instead of "mmsn_offline.htm".

The worm also goes through all hard and mapped network drives, appending the worm code to each file that has extension ".htm", ".html" or ".asp".

Further, if the directory contains any files with either ".ini" or ".hlp" extensions, a file "script.ini" is created as well. Therefore, if the user has IRC client mIRC installed into system, the worm will replace the default "script.ini" with its own. After that the worm sends itself to each user that joins the same IRC channel where the infected user is.

If the day of the month is 1st, 5th, 10th, 15th or 20th, the worm replaces all files from all drives with a zero byte files, destroying their original content.