Galil is an email worm that appeared on 4th of December 2002. On 5th of December we also received copies of this worm packed with UPX file compressor. The worm spreads in emails as a ZIP or EXE file and a message that teases a user to run the attached file. As the worm does not use Iframe exploit, its spreading is limited.

To disinfect the worm it's enough to delete its 3 files from Windows System directory.

The worm's file is a self-extracting archive about 80kb long, the UPX-packed version is 50kb long. When run, the worm shows a fake Flash animation: 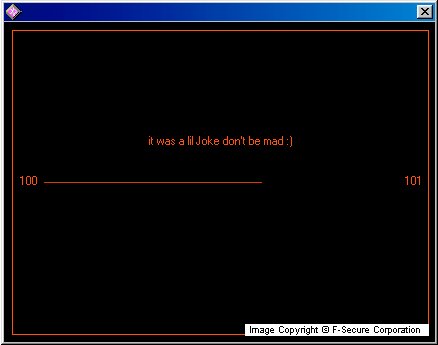 Then the worm installs itself into Windows System folder as:

The main worm's file MPLAYER.EXE is written in Visual Basic and compressed with UPX, it makes itself hidden when run. The autostart Registry key is created for this MPLAYER.EXE file:

The worm also creates a counter in the following Registry key:

This counter is incremented every time the worm runs. When the counter value reaches 5, the worm deletes all files on drives D:, E:, F: and G:. After that the worm shows a message:

The worm searches HTM and HTML files on an infected hard drive for email addresses and stores them in MMAILS.DLL file. Then the worm gets user's email address and SMTP server name, logs into the server and sends itself out to all found email addresses. The infected message usually looks like that:

The message body can also contain a random text file that the worm found on an infected hard drive.

The worm does not use Iframe exploit to run its file automatically on recipients' systems. Nowdays social engineering does not work as well as it used to work before, so the worm's spreading is quite limited as many users do not run unknown files that they receive in emails.