Maldal is written in Visual Basic for Applictions. It collects email addresses from Outlook database and from MSN Messenger contact list. It sends messages with constant message text and attachment name.

When the attachment is opened it displays a Christmas greeting window to disguise the malicious activity.

The worm copies itself to the Windows directory as 'Christmas.exe'. This copy of the worm is added to the registry run keys as

so it will be started whenever Windows starts up.

After activation the worm disables the keyboard and attempts to delete everything from the Windows System directory.

The computer name is set to 'ZaCker' and modifies the Internet Explorer start page to an infected homepage. 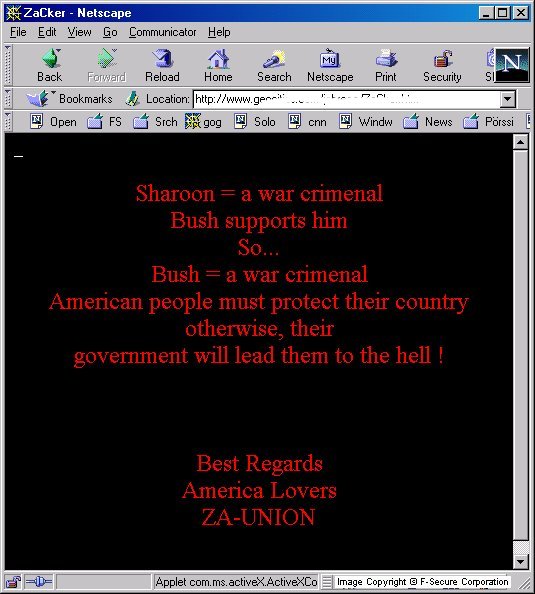 At this point, the worm will attempt to remove contens of the following directories on the same drive:

The worm will also drop file "DaLaL.htm" into Windows System directory, which contains a link to the second part of the worm. This file is copied, along with the copy of the worm as "server.vbs" to root of each mapped network drive.

Next the worm goes trough all all fixed and network drives, and appends the content of "DaLaL.htm" to each file with ".htm", ".html" or ".asp" extension.

Maldal also searchs for mIRC application's configuration file, "mirc.ini", and replaces it. After that an infected user will show a message when another user joins the IRC channel where the user is. This message contains also a link to the infected web page.

Finally, if the script is executed after 30 minutes of the initial infection, and the number of seconds equals five, it attempts to delete all files from the system, shows a message box and shuts down Windows.

The second part of the worm behaves in the same way as the first part, except it drops another file to the Windows system directory - "outlook.vbs" - and executes it. This file then sends a message with a link to itself to all recipients listed in the Outlook Contacts folder.

There is a wide variety of closely related Maldal-variants, named with variable variant letters, depending on the anti-virus vendor. Latest (at the time of this writing) is known as Maldal.D, Maldal.E, Maldal.F, Maldal.G or Maldal.H, depending on the vendor. This variant (known to us as Maldal.D) and all variants up to it are detected by F-Secure Anti-Virus with the update released on January 3rd, 2002.