The binary part is a simple dropper that drops the other two and checks for the presence of the .NET environment on the machine. When started it first copies itself to 'C:\MS02-010.exe' then drops the Visual Basic Script mass mailer part to a file called 'Sharp.vbs'. The .NET component is dropped to the Windows directory as 'cs.exe'. If the .NET environment is available the dropper starts the .NET component then exits.

When it's started this component first drops a small Visual Basic Script file to the user's startup directory. The script displays the following message at the next login:

The virus infects all EXE files in the system directory and three other directories selected from 'Program Files'. The virus code is prepended to the host file. When the infected file is started it first tries to infect other files then it writes the host program to a temporary file ('temp.exe') and starts it.

Note: Even though .NET is supposed to be platform independent this virus will not work on non-intel PCs since it relies on the Intel binary part.

The Visual Basic Script component is a simple mass-mailer. It uses MS Outlook application to send messages to each recipient listed in each Outlook address book. The sent messages look as follows: 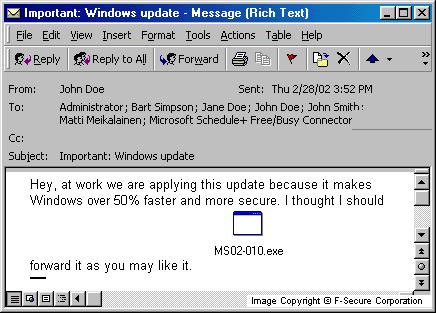 By using as an attachment the name MS02-010 the worm tries to disguise itself as the patch described on Microsoft site:

After mass-mailing itself, the script mass-mailing component deletes the sent emails and its copy Sharp.VBS from the infected system.

The Visual Basic Script component of this variant is the same as Sharpei.A